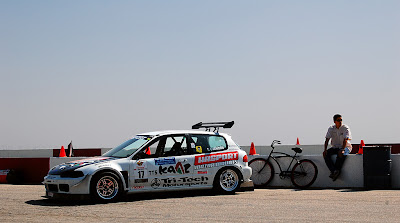 On Oct 10th & 11th, team KSport went out for a low key “test & tune” event with the National Auto Sport Association (NASA). Coincidentally, the NASA So Cal event was running the same configuration that the Super Lap Battle (SLB) uses for the Finals. The goal of the event was simply to shake down the car after some minor changes in preparation of the big event but the team ended up with much more success than initially planned. 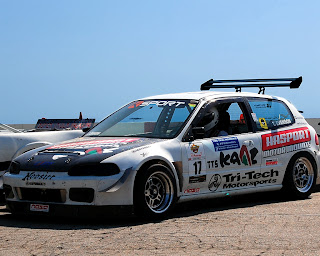 KSport’s weapon of choice for the SLB this year will be a 95 Honda Civic. The pilot will be the Time Attack driver Tage Evanson. Furthermore, three out of the four sessions on Saturday were filled with car issues, but once resolved, the Civic managed a 1:56.4 on the low boost tune which actually ended up beating the previous NASA So Cal track record! As one might imagine, this did cause quite a stir in the paddock. Because there was well over half a dozen drivers in the class (TTS), they were all amazed and in disbelief at what the car was capable of. Funny enough, we later found out the car was down on power. When the lap was already set, it corded the front tires!

Moreover, we didn’t realize that the following day someone would mount another set of worn tires up and program the car with higher power. This is good for approximately 300WHP. The KSport Civic ripped off a 1:53.2 second time on the first lap and in traffic! Satisfied with the setup of the car, KSport was ready to head back home to Phoenix. However, they learned that the NASA track record for the class (TTU) was also good enough for that track record. So, the team decided to stay for the second session and see if they could muster a faster time yet. Track conditions were not as optimal (dusty, air temp too hot, etc.) as the morning session. But, the Civic still managed a 1:52.8 on its 2nd lap. This beat the previous track record by nearly 2.5 seconds!!!

NOTE: The car is still legal for TTU @ 460WHP. Imagine what kind of times the KSport Civic could have done with an additional 160 WHP??? 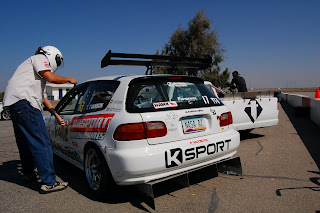 In 2006, and with an unlimited budget, the GM Performance Division set the fastest FF time ever recorded. They did this with their 1,300 pounds of all carbon fiber and 400+WHP Chevy Cobalt. Some believe it to be the fastest FF car on the planet. It boasts an impressive time of 1:51.3 at Buttonwillows CW #13 configuration. Ultimtaly, Ksport at the “Test & Tune” event was a success. And, when the KSport Civic returns to Buttonwillow next month, it will have fresh tires, cooler weather and even more power. Will it be enough to make up an additional 1.5 seconds? Could the KSport Civic end up becoming the fastest FF car on the planet? Stay tuned to find out!

Most importantly, lets not forget that this little Honda Civic is currently using an off the shelf KSport Kontrol Pro damper kit! Many companies will “claim” in their advertisements about how their coilover kits are the best. Apparently, KSport doesn’t need to…