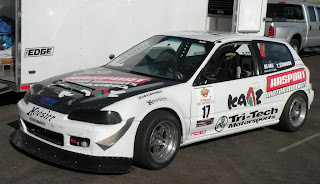 Listen_To_This. A month or so ago, Tage Evanson, a local/regional time attack and time trial racer called us up and wanted to talk about suspension parts for his Civic. Usually requests like this are taken lightly, and they have to be, because KSport gets hundreds of requests for sponsorships every week–seriously–and it really takes up a lot of time to determine whats worth it, what isnt, etc. Picking and choosing is tough, so often well just avoid the conversation all together, or set aside large chunk of time on a weekend to sift through all the proposals and decide who gets a call back and who doesnt. Tage is based out of Phoenix, just like KSport, and given that he won the 2007 Super Lap Battle and stole the track record away from HASport, who had it for years, we were more than interested in working with him and his Civic.

Well get into more of Tages accomplishments, later. Last weekend was the first time up for Tage and his Civic with the new KSport suspension. What that entails is literally and off the shelf Kontrol Pro kit with stiffer different spring rates. No changes to dampening, shock length, etc. Anyone could buy this kit for their EG Honda Civic. The track for the first test was Firebird Intl. Raceways “West Course”, located about 20-minutes southeast of KSports headquarters in Phoenix.

This event was running with the National Autosports Association (NASA) under their strict, nationally-sanctioned Time Trial rulebook. Within that series there are nine classes; the Civic runs in the “TTS” Class, which is the 3rd quickest. (TTR is fastest, then TTU, then TTS).

Tage won his class on the first day out. Actually, his best lap was set in the first session of the day, first time ever on KSports. Looking deeper, Tage beat the TTS track record for Firebird Raceway, with a time of 1:01.39. It doesnt end there.

Remember how I said there are two faster classes above the Civic in the NASA Time Trial ranks? Tage beat all those guys too. The TTU record is a 1:01.56, and the unlimited TTR class record is a 1:02.41. What that simply means is, Tage set the fastest lap ever on Firebird West for a NASA event, and that is the all-out FWD lap record for Firebird West as well. Well just say it again… The fastest FWD car to ever set foot (or, tire) on Firebird Raceways West course, was using off the shelf KSports.

In addition to that, Brady Dohrmann in his BMW M3 set the TTC lap record of 1:05.303. Jeremy Renshaws TTB class record from 2008 still stands as well, and he was on KSports. Of the nine NASA classes to participate on that track, three of the lap records were set on KSport suspension.